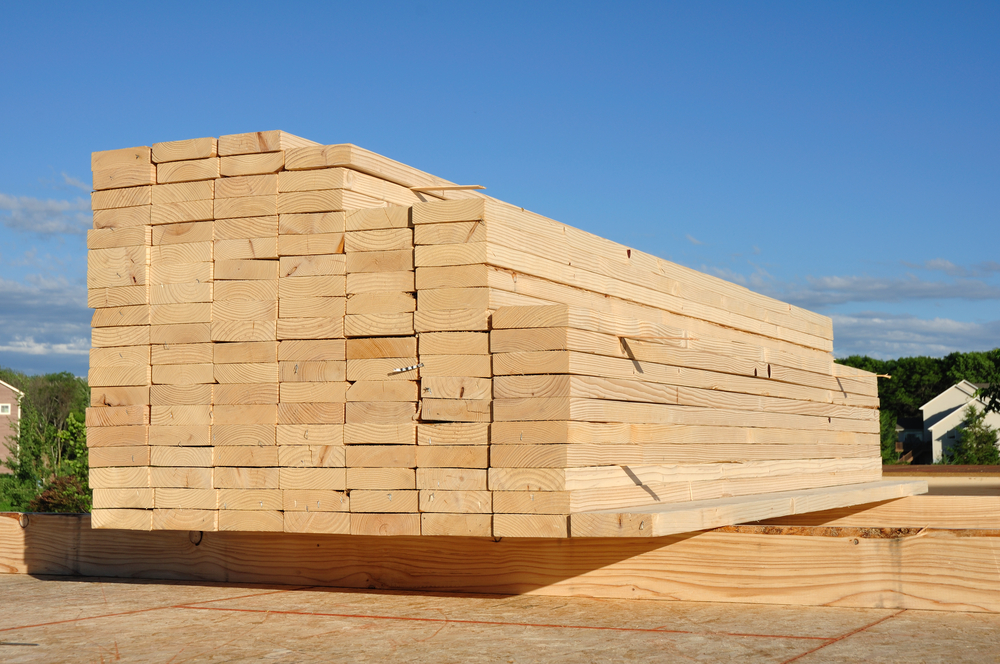 During these months of deep summer when construction activity is still going on but lumber sales slow because most retailers and end-user have received the wood they expect to need before 3Q, the lumber market generally finds new balance. There are, of course, other variables which affect solid wood prices during the summer season; such as wildfires, labour disputes, disruptions to transportation, etc. This year it looks like there is a nice equilibrium, as the general price trend over the past couple of months has been quite stable. Industry folks are relieved to see some stability returning, after the intense fluctuation of prices over the past two years. The US housing market is cooling off slightly but is still much more active than 2019 and earlier, so  there is potential for more good lumber sales volumes coming in the near future.

Recovering somewhat from a steep drop the week before, for the week ending August 12, 2022 the price of benchmark softwood lumber item Western Spruce-Pine-Fir 2x4 #2&Btr KD (RL) was US$624 mfbm, said weekly forest products industry price guide newsletter Madison’s Lumber Reporter. This is up by +$14, or +2% from the previous week when it was $610, and is down by -$47, or -7%, from one month ago when it was $671. 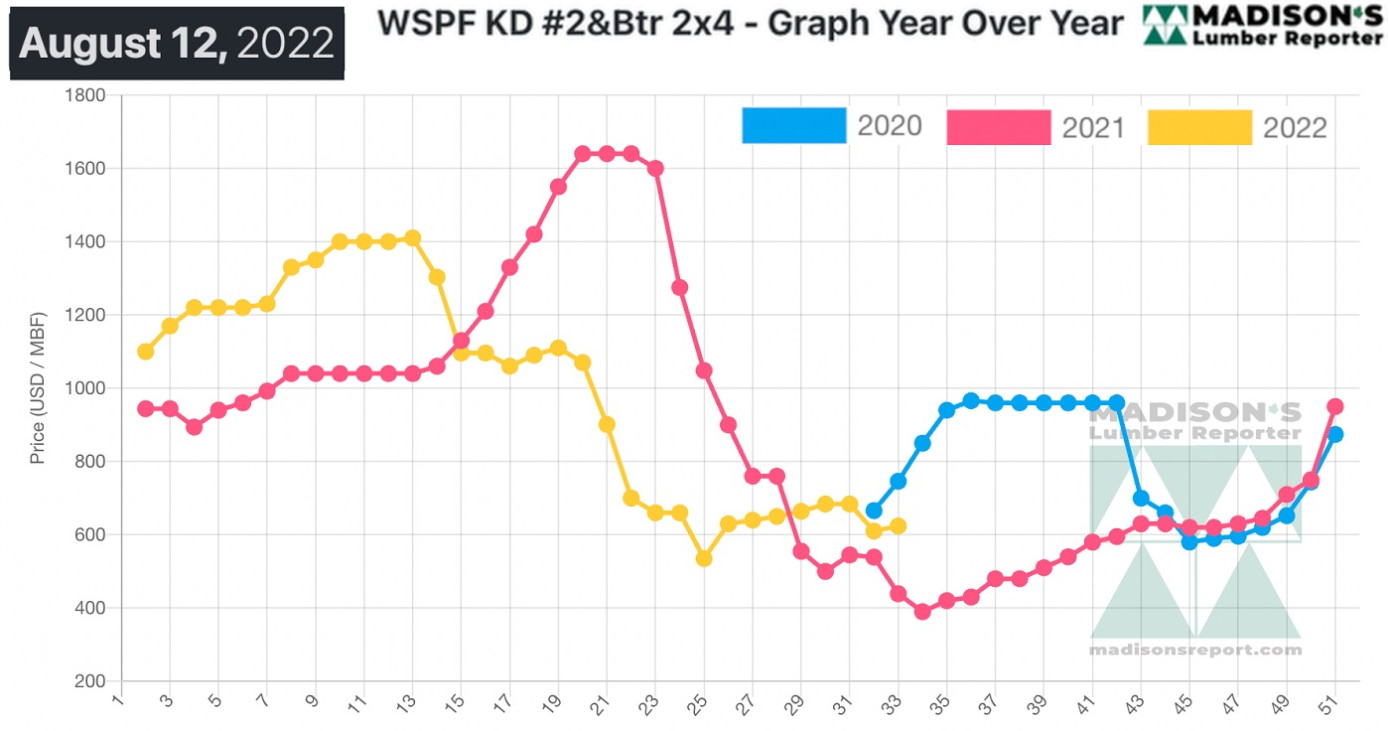 Sawmills fiddled with their asking prices as they established order files into late-August or early-September, item- and source-dependent.

A combination of curtailment announcement by a major producer and the re-designation of lumber Futures boosted market activity. 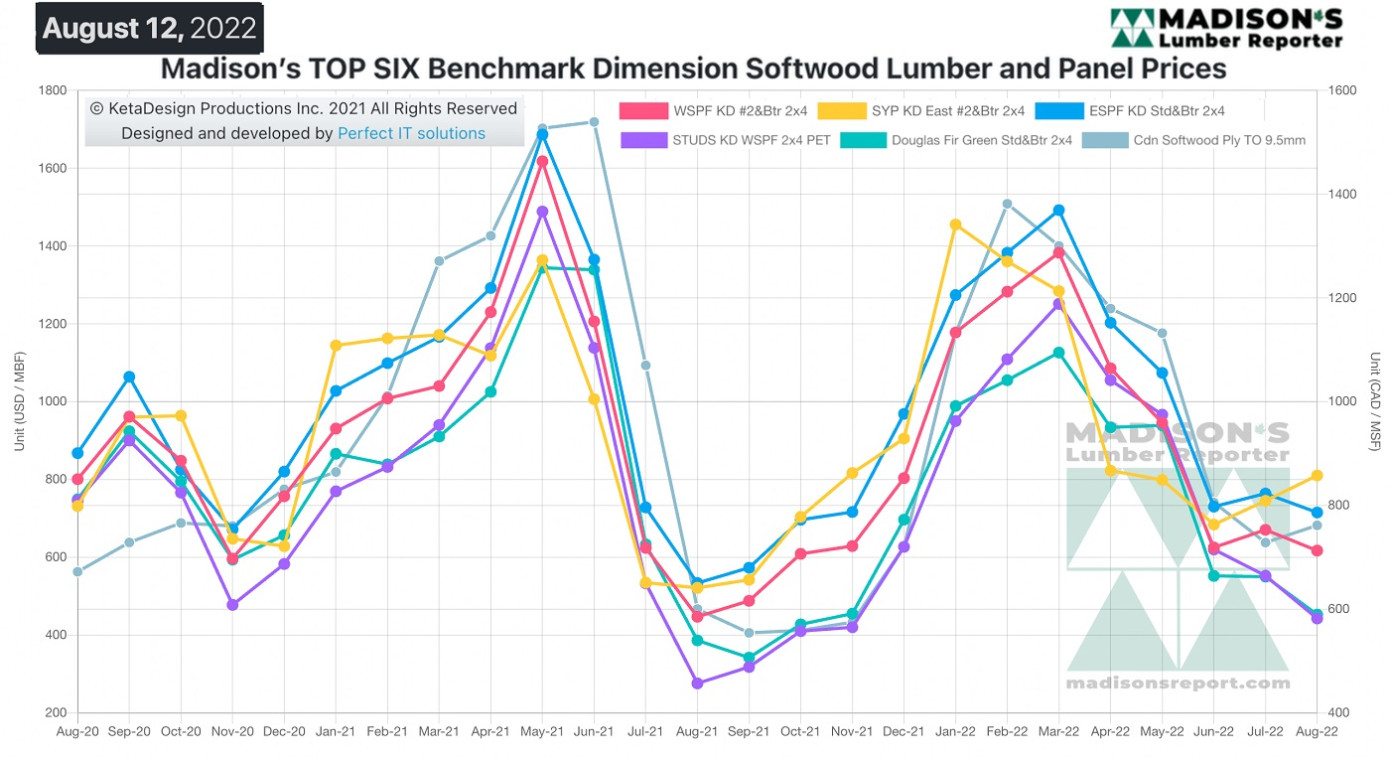 The re-designation of lumber Futures to include Eastern S-P-F products early in the week clouded an already confused market, pushing many heretofore reluctant buyers off the fence and into purchasing-mode. Low grade offerings were nearly as limited as standard grades..

Western S-P-F suppliers in Canada reported strong inquiry and follow-through compared to the previous week. First, a big change to lumber Futures specifications on the CME came about on Monday, making trading more liquid. While volumes remain tiny compared to other commodities, the prices quoted immediately jumped up from the previous week to match cash exactly. The product mix in Futures now includes Eastern S-P-F, so prices quoted should not be compared just to WSPF as previously. Adding to that, West Fraser announced on Monday the permanent curtailment of roughly 170 million board feet of combined production at its Fraser Lake and Williams Lake sawmills in BC. Order files at sawmills ranged between two- and four-weeks.

Demand for bread-and-butter dimensional Southern Yellow Pine items slumped a bit, particularly that for 2x6 in the central zone. Order files on standard grade commodities were in the one- to three-week range while high grade pushed into the first week of September. Stud sales remained robust compared to dimension, with lead times into the week of August 29th and stretching into September.