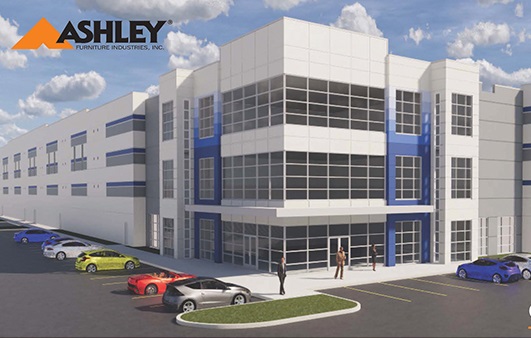 Ashley Furniture Industries, Inc. plans to build a new facility in Etna, Ohio, investing $70 million and creating 300 new jobs. Hiring will begin in late 2021, once the building is completed.

Ashley’s new facility will serve as a regional distribution hub, expanding the company’s already established national network of eight major distribution centers servicing the U.S. The new 1 million square-foot warehouse will serve a variety of needs, including global e-commerce fulfillment and store shipments. Ashley’s $70 million investment will be put toward building the facility along with machinery and equipment costs.

“This is a major move to expand our warehouse capacity to support brick-and-mortar retail operations, as well as our ecommerce growth,” said Todd Wanek, president and CEO of Ashley Furniture Industries. “Providing access to nearly 50% of the U.S. population within a day’s drive, Etna’s location in Central Ohio is a strategic choice for Ashley. Our operations here will allow us to greatly expand our network and better serve customers across the country.”

Established in 1945, Ashley designs, manufactures and distributes home furnishings through retail, e-commerce and wholesale markets. The company is headquartered in Arcadia, Wisconsin, and sells furniture in more than 20,000 storefronts in 155 countries around the globe.