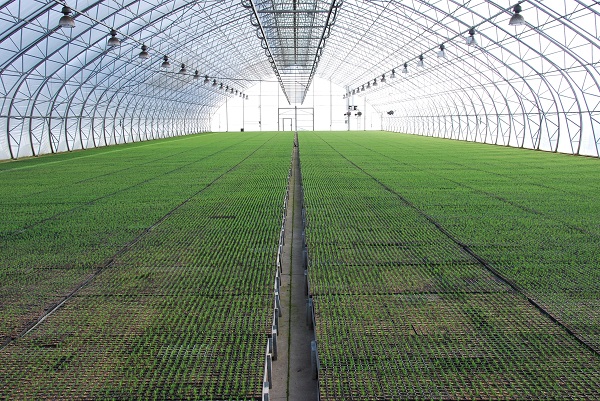 Spring sowing works have started in the largest nurseries of JSC “Latvia’s State Forests” (LVM). LVM Mazsili, Strenči nurseries, as well as Podiņi tree nursery, which was expanded last year, have been actively sowing seeds of forest seedlings. Sowing will also start in the new Mežvidi nursery, where a new filling and sowing line was set up in the first days of March; the first three greenhouses will also be prepared for sowing.

“The first stage of sowing works has been started in heated greenhouses, where the required temperature and humidity level is ensured around the clock. With a high-precision seed drill, seeds are sown in specially designed cassettes filled with a specially prepared substrate. Once the cassettes are ready, they are immediately transported to greenhouses for germination. Later, when the sowings have germinated and slightly grown in size, the cassettes with the new seedlings will be moved to special outdoor landfills, but the greenhouse will be filled again with the sowings of the next circulation. Pine is always sown as the first species in the cultivation of container seedlings,” says Guntis Grandāns, Director of LVM Sēklas un stādi (LVM Seeds and Seedlings).

The purpose of the activities of Joint Stock Company “Latvia’s State Forests” (LVM) is administration of state-owned forest property and management of public forest, ensuring preservation and increase of its value and generation of revenue for its owner – the State.