Lumber prices bounce on equitable supply-demand balance
Trading Suppliers News Analytics Events Jobs Advertising Lesprom
For the week ending June 24, 2022 the price of benchmark softwood lumber item Western Spruce-Pine-Fir 2x4 #2&Btr KD (RL) was again US$630 mfbm, said weekly forest products industry price guide newsletter Madison’s Lumber Reporter. This is up by +$95, or +18% from the previous week when it was $535 but is down by -$315, or -33%, from one month ago when it was $945. 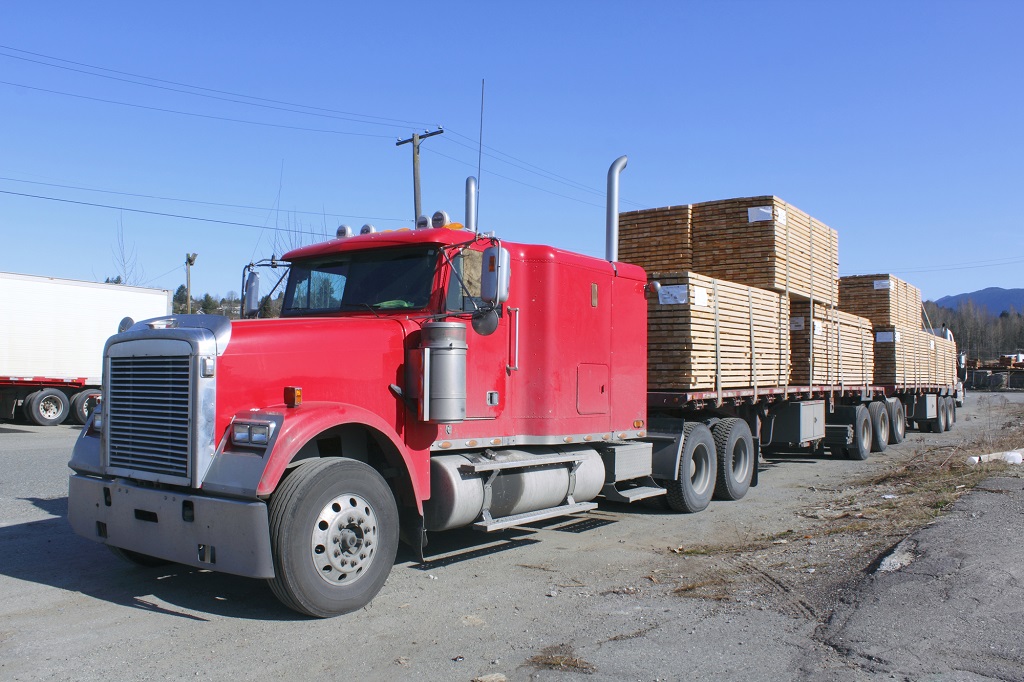 The significant price cuts of the previous week were successful in spurring renewed demand for softwood lumber materials in North America. Indeed, so successful that prices bounced almost back up to the levels of the week prior. While sales volumes still were not optimal, looming seasonal curtailments motivated somewhat reluctant customers to pull the trigger and buy.

That sales boost was enough to prompt producers to raise their prices. The oncoming dual Canada Day/US Independence Day long weekends normally signals the true slow-down of softwood lumber sales, with the annual price lows approaching. It is not known yet whether this year will see the usual seasonal price cycle; a lot depends on macroeconomic conditions like housing starts, and on weather emergencies like storms, floods, or fires. 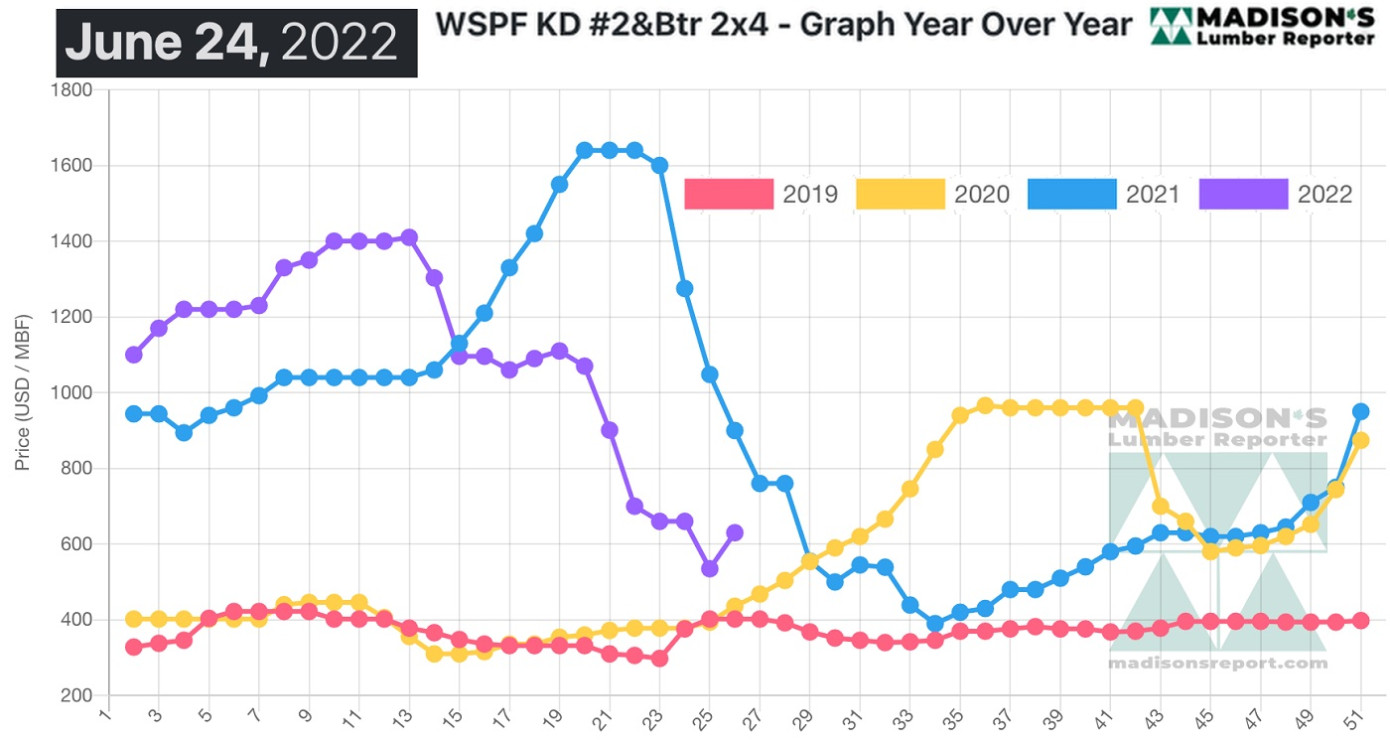 Buyers were further persuaded to jump in with purchases sooner than later as British Columbia sawmills noted that stumpage fees were slated to increase on July 1st.

Most dimensional lumber and stud items appeared to put in a price bottom, while panel prices continued to peel off. 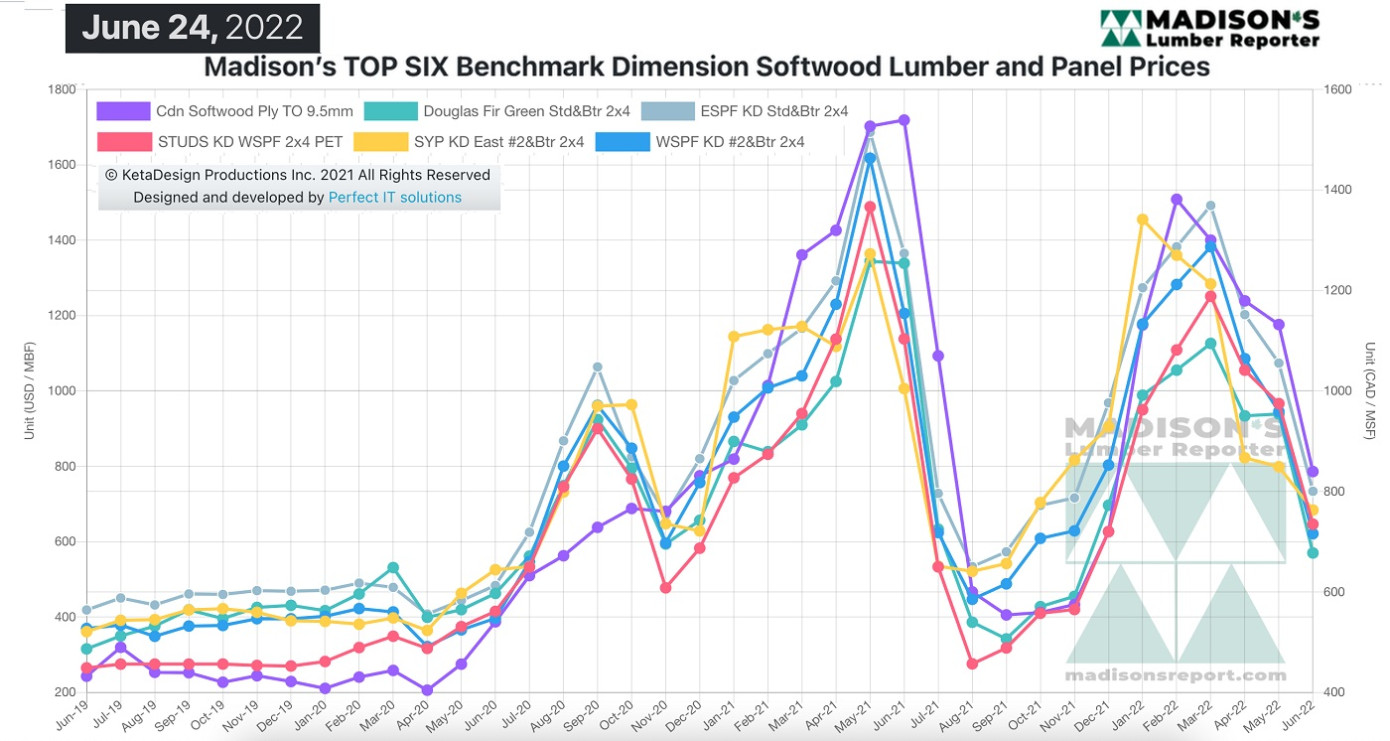 Spurred on by a combination of flattening prices, upward movement in lumber futures, and their own bare field inventories, a large contingent of Western S-P-F buyers in the United States got off the fence and dealt. Customers looking to Canadian producers began to scramble a bit as the logistical equation on those orders was complicated by maintenance-related sawmill shutdowns planned for early July.

Canadian Western S-P-F lumber purveyors heaved palpable sighs of relief in unanimously reporting that a price bottom had been reached by midweek. Prices were still indeterminate in many cases, but buyers were certainly more active than they were recently, as they saw numbers evening out. Many decided they couldn’t wait any longer, particularly in view of the typical summer shutdowns scheduled for early July. While there were still deals to be had on much of the prompt material at both regional and national mills, that availability dried up quickly.