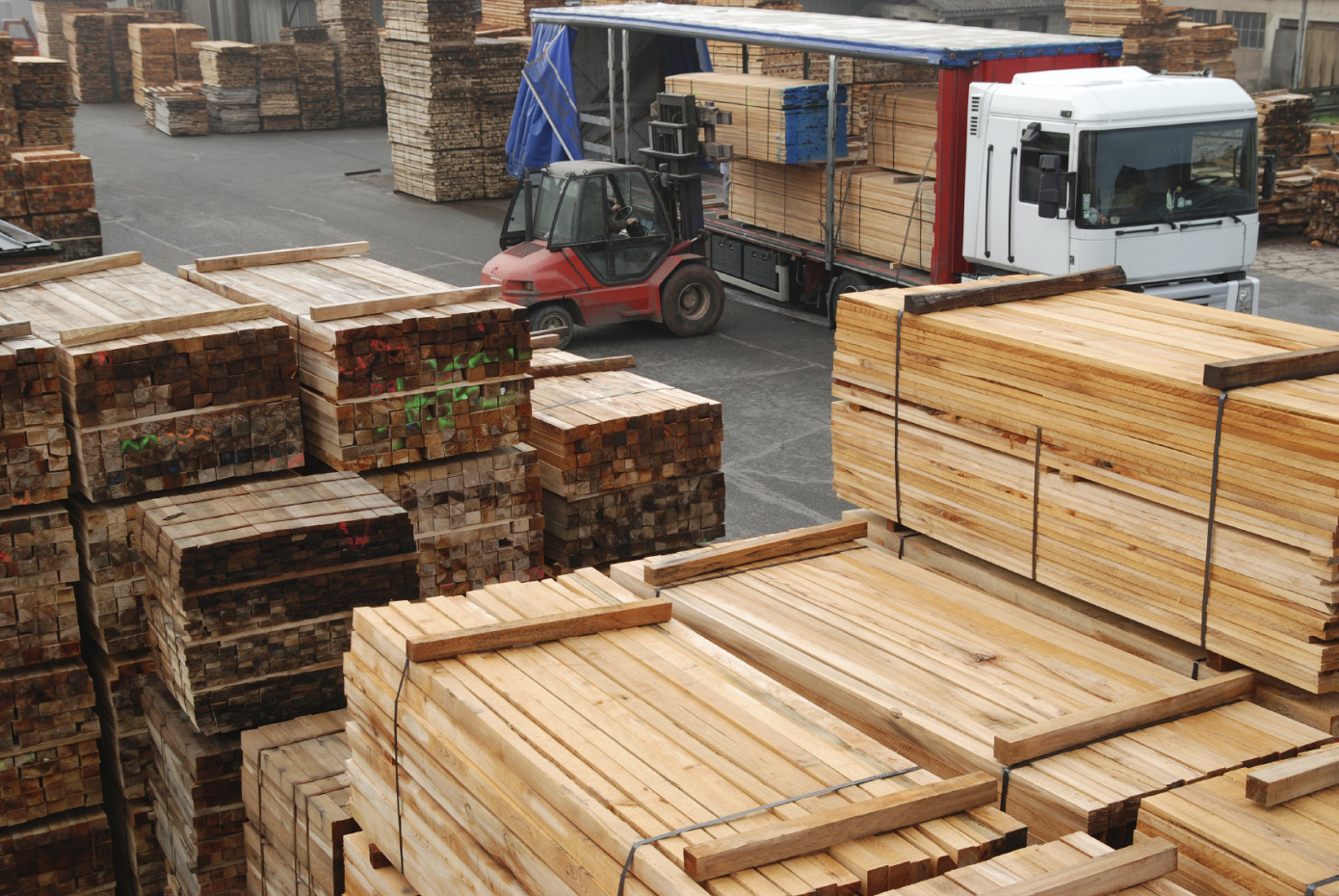 In mid-November the annual North American Wholesale Lumbermen’s Association (NAWLA) gathering took many traders away from their desks to hob-nob with their colleagues, often determining between themselves the condition for lumber sales to the end of the year. As such, sales were slow but somewhat consistent, and prices remained steady. True winter weather came on in many parts of North America, causing the usual stall to construction activity and indeed sawmill manufacturing volumes. The past two years ended with some serious surprises, which propped up prices significantly at an unusual time of year.

Remaining flat from the previous week, in the week ending November 11, 2022, the price of benchmark softwood lumber item Western Spruce-Pine-Fir 2x4 #2&Btr KD (RL) was again US$490 mfbm, said weekly forest products industry price guide newsletter Madison’s Lumber Reporter. This is up by +$28, or +6%, from one month ago when it was $463. 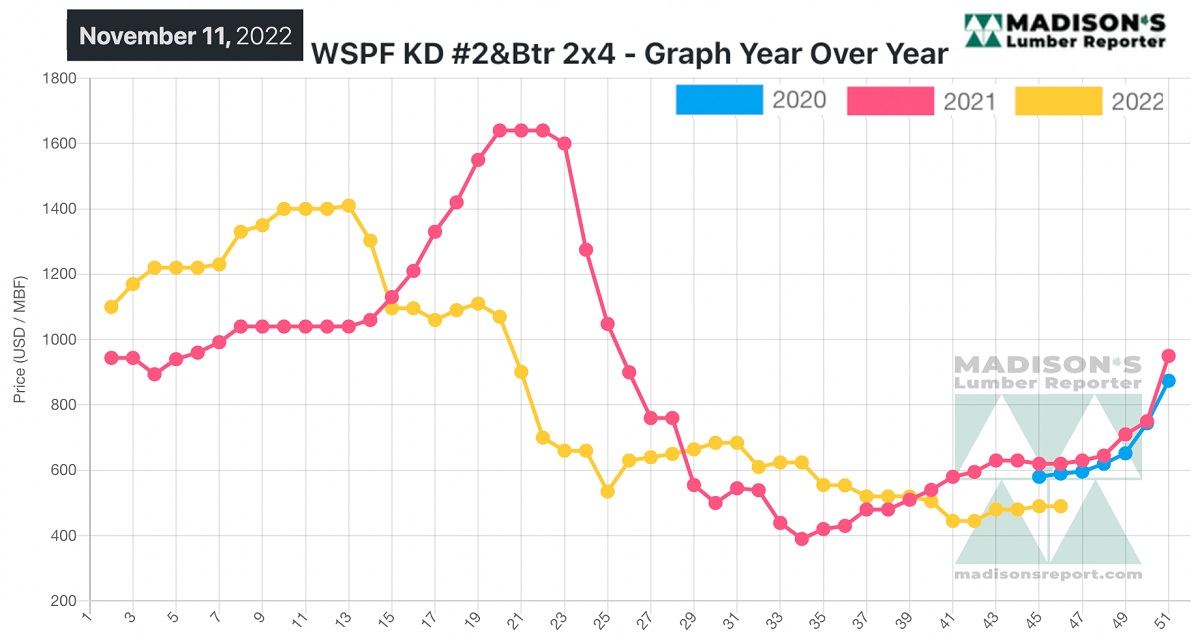 Adding to the quietude was a significant contingent of players absconding to Arizona to hobnob at the North American Wholesale Lumbermen’s Association Trader’s Market.

Lacklustere demand for Western S-P-F lumber and studs diminished further as the week wore on, according to traders in the United States. Buyers anticipated a softening market and held off, waiting to see where numbers would land after the NAWLA Trader’s Market wrapped up. The US mid-term elections provided another distraction from the lumber game. Field inventories remained extremely low, and sawmills showed limited availability of most dimension items and nine-foot studs. One veteran trader was convinced the market was sneaky strong due to that combination of scant supply and depleted inventories. Sawmill order files were into the week of November 21st. 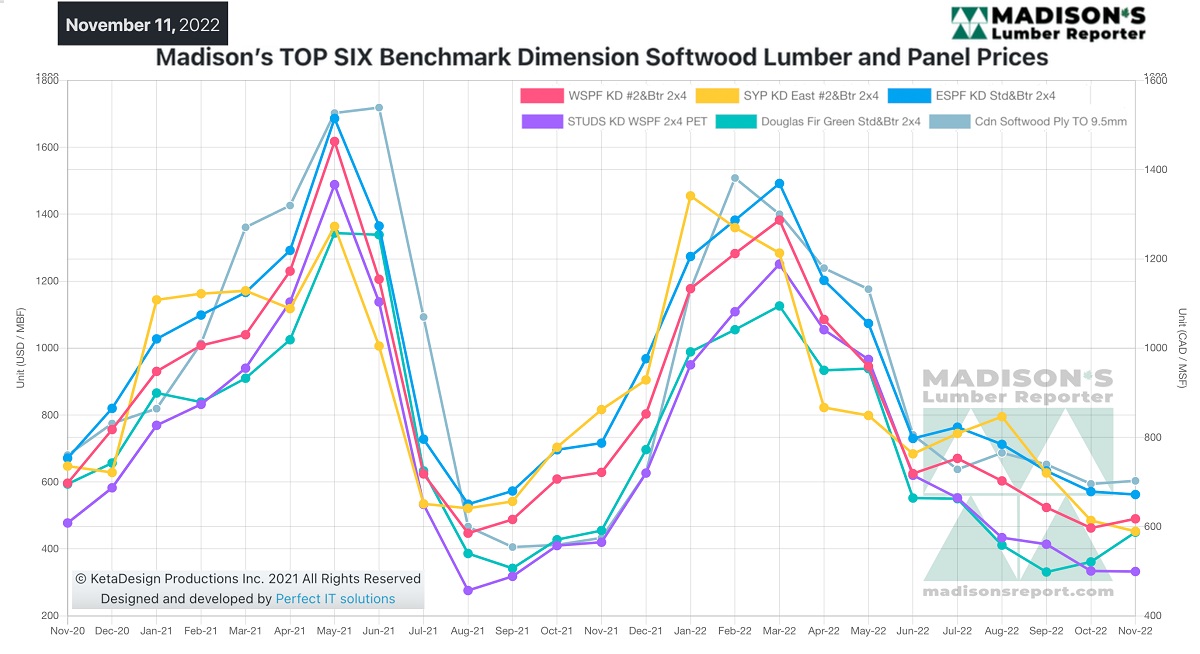 Suppliers of Western S-P-F in Canada described a market that was subdued by a sudden and fierce snap of cold weather across the Western provinces. Buyers were already showing next to no urgency as the previous week wrapped up, and demand tapered off even further. Distributers reported meagre takeaway. Pickup and delivery timelines suffered for the first time in awhile as winter weather affected road conditions and rail service readiness.

Demand for Western S-P-F studs was unremarkable as buyers scurried to the sidelines in response to inclement weather. Most appeared to be waiting until after the NAWLA Trader’s Market to make any decisions about short-term coverage. Weak demand barely kept stud mills ahead of showing prompt availability, with order files in the range of two- or three-weeks. Those buyers who were still active leaned on the distribution network, where they reported decent delivery times even as weather conditions worsened.