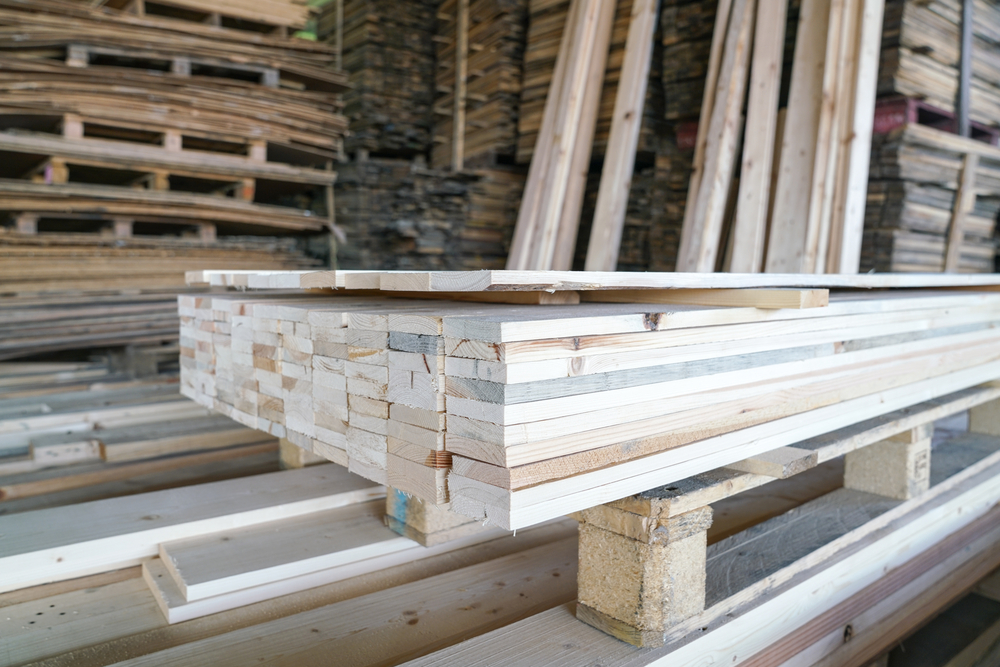 Several benchmark North American construction framing dimension softwood lumber and panel prices remained flat in mid-September, despite a normal seasonal slow-down in buying. This is because a number of large operators announced curtailments and downtime in order to keep supply in line with waning demand. Dimension lumber sawmills and panel (plywood and oriented strand board) mills alike reduced production in order to keep prices from falling too much further. Customers responded with total lack of concern, so confident were they that there would be enough supply in the coming weeks to suit their immediate needs. As the months march on to year-end, the desire of all is to finish the year with no lumber inventory in their yards. As such, players — from sawmills to wholesalers through retailers — are not normally willing to boost their stock on-hand at this time of year.

A moderating of supply and demand kept prices flat for the week ending September 23, 2022, when the price of benchmark softwood lumber item Western Spruce-Pine-Fir 2x4 #2&Btr KD (RL) was again US$520 mfbm, said weekly forest products industry price guide newsletter Madison’s Lumber Reporter. This is down by -$34, or -6% from the previous week when it was $554, and is down by -$83, or -14%, from one month ago when it was $603. 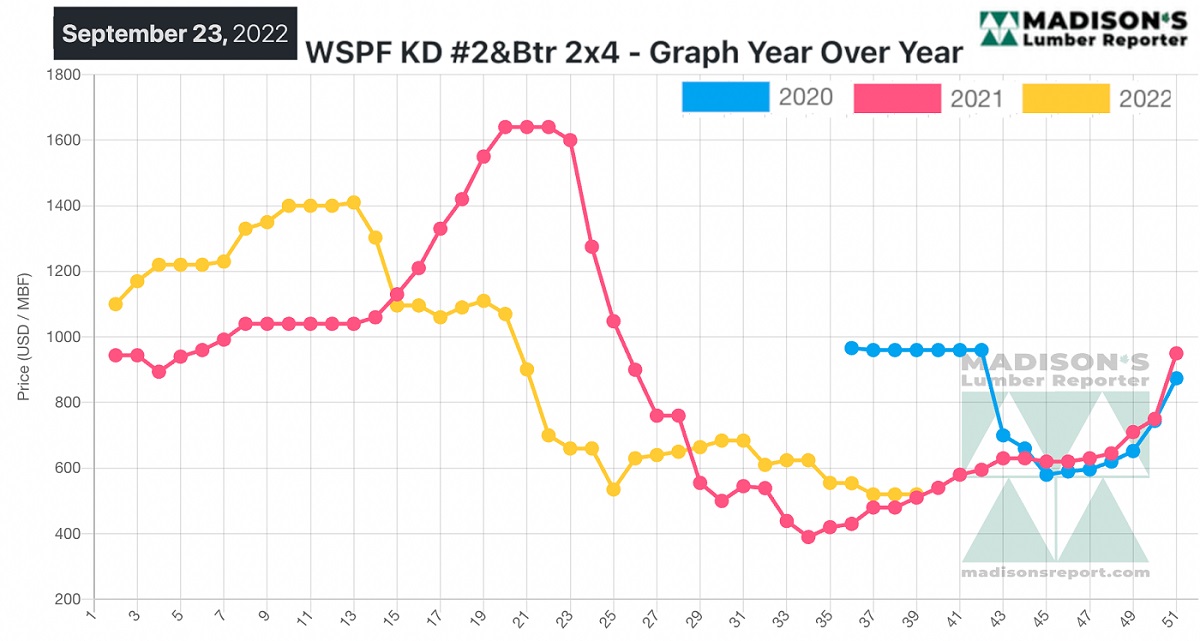 Players wondered how Canfor’s latest move will affect the market, as the company announced this week it will temporarily reduce production at its British Columbia facilities due to challenging market conditions. 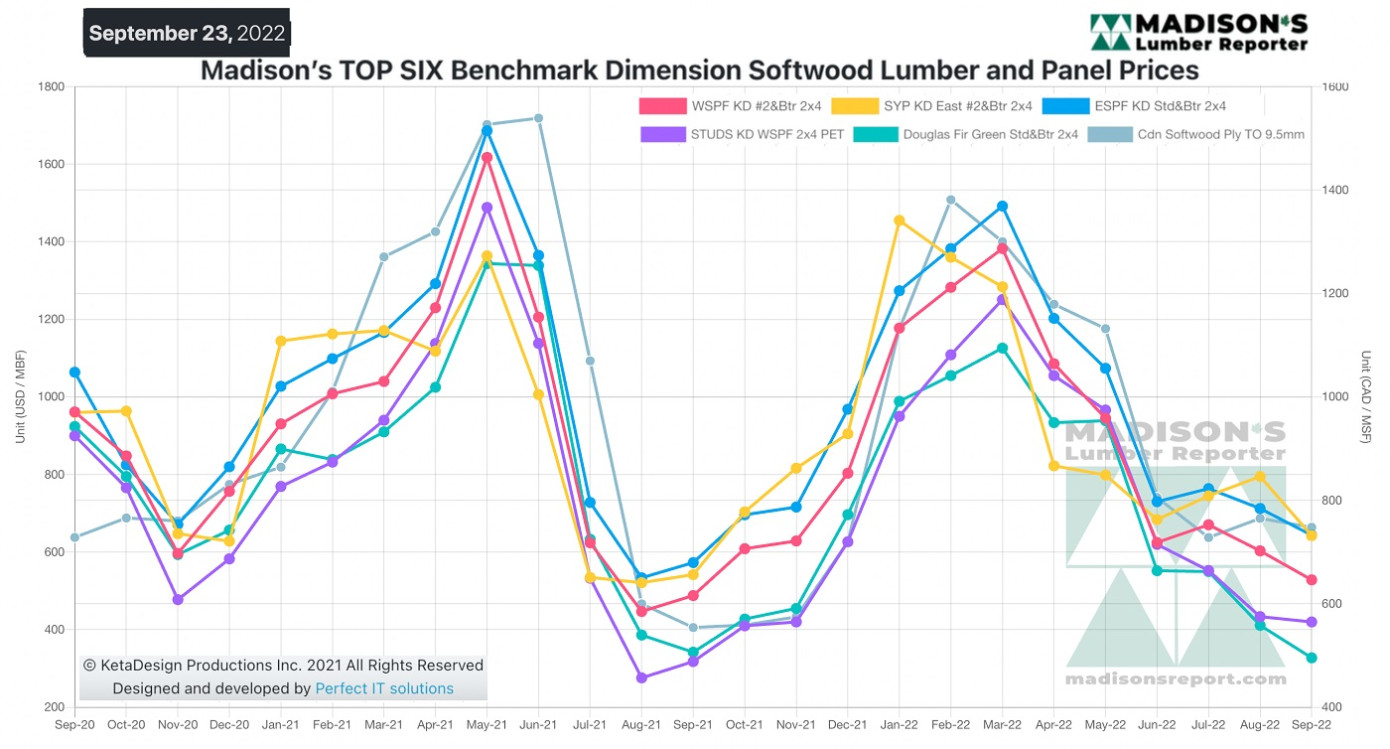 Many buyers of Western S-P-F in the United States retreated back to the sidelines as perceived downside risk in the dithering market was minimal. Retailers were apparently extra cautious in their dealings. Many thought a curtailment announcement from a large Western Canadian producer would spur some sales, but quietude reigned. Sawmill order files were largely into the first or second week of October, with increasing reports of rail car delays. Producers showed fairly consistent if somewhat limited availability.

The Western S-P-F market settled into a more balanced state. Dimension R/L prices were mostly flat, with a few slightly up from the previous week’s levels. Buyers maintained a cautious approach, confining much of their activity to highly-specified loads through the distribution network. Producers in Western Canada showed some accumulations of 2x4 and 2x6 items, while availability of anything 2x8 and wider was limited by comparison but improving. Players wondered how Canfor’s latest move will affect the market, as the company announced this week it will temporarily reduce production at its British Columbia facilities due to challenging market conditions. The two-week curtailment will begin September 26th and is expected to reduce overall production capacity by 200 million board feet.

Downward pressure was evident on plywood prices as mills felt the motivation to move inventory but weren’t in the habit of accepting counter-offers, just yet. With so much more Canadian OSB headed to US markets than plywood, prices of the former benefitted from the exchange rate and climbed around 5%. Order files were no further than two weeks out and were mostly the result of transportation delays.

Most business for Western S-P-F panels in Canada was done in the form of small LTL orders, which customers tried to whittle down to truckload pricing levels. Some secondary suppliers dealt while many turned down counter-offers. Supply of OSB appeared to be getting squeezed as finding cash wood was auspiciously difficult. Buyers were unconcerned, showing zero urgency and high confidence that they could find volume when they needed it.